2016 | June
When last we left this blog, we were finishing up our time in the beautiful English countryside and heading to the city. Not just any city… London, baby! I had traveled to London in May 2000 with my mom but I was really excited to experience it with my boys.
We headed to the airport to return our rental car (which took WAY longer than it should have because the traffic around London is almost unbelievable) and then took our hired car straight to the flat we were staying in, booked through HomeAway.com.
Our hostess was an absolutely lovely older lady who welcomed us personally into her home and she and James got along famously. The flat was in Chelsea right near the Royal Hospital Chelsea and we LOVED the area. It was a two-minute walk to the Albert Bridge, which has personal importance to Chris and I (you’ll have to ask us why in person, if you don’t already know), and we could easily get to the London Underground aka The Tube.
Having watched Bedknobs & Broomsticks repeatedly, James was insistent on seeing the Portobello Road Market (and singing the corresponding song. Repeatedly.). By the time we walked that way, most of the stalls were packing up, but it was still a neat experience. The multicolored houses in that area are pretty unique in London. Dinner that night was at a great little restaurant called Ffiona’s and it was so delicious! We were waited on by Ffiona herself, such a great atmosphere.
Sunday morning (which also happened to be Father’s Day) we took the tube out to Kew Gardens and I was really excited about it. Visiting local gardens when we travel is one of my favorite things, and this one did not disappoint. 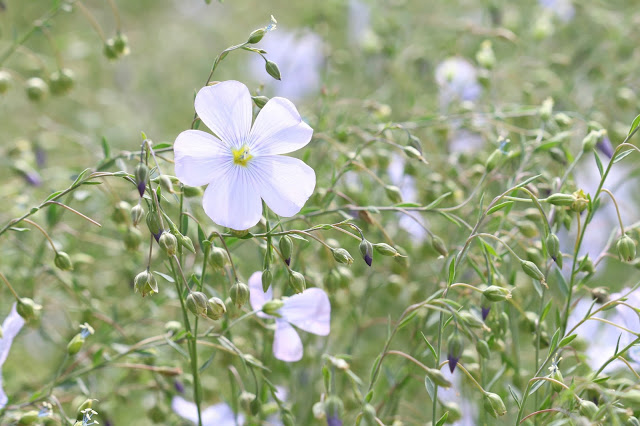 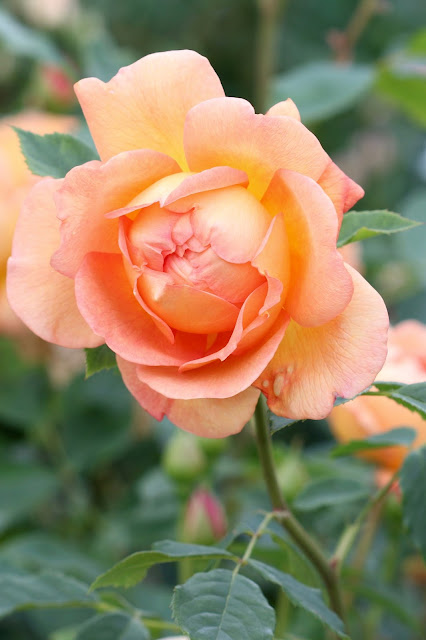 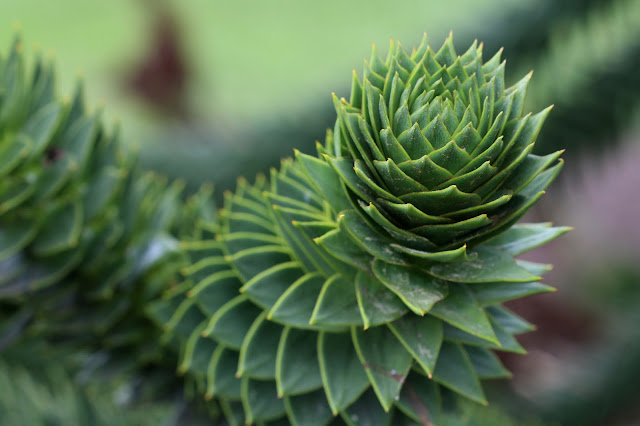 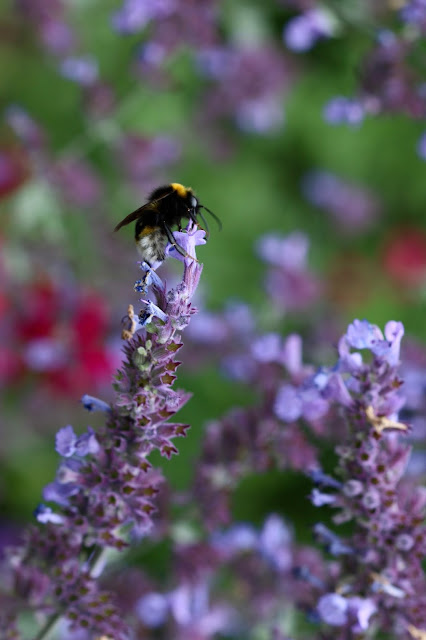 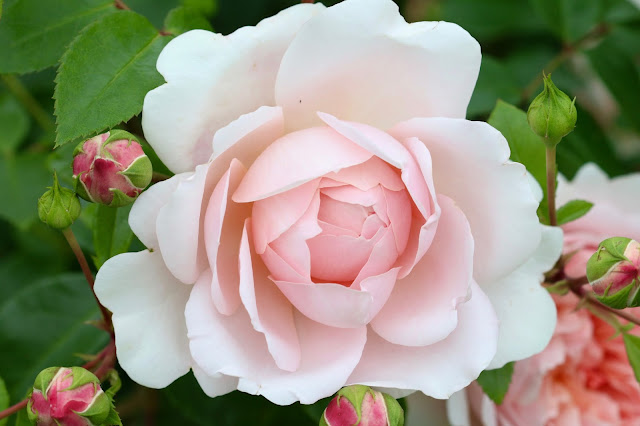 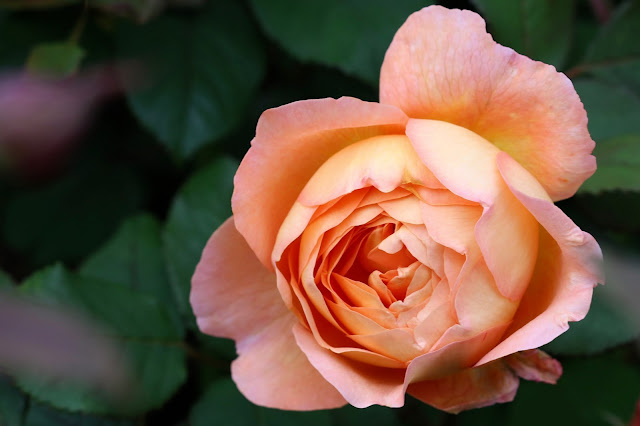 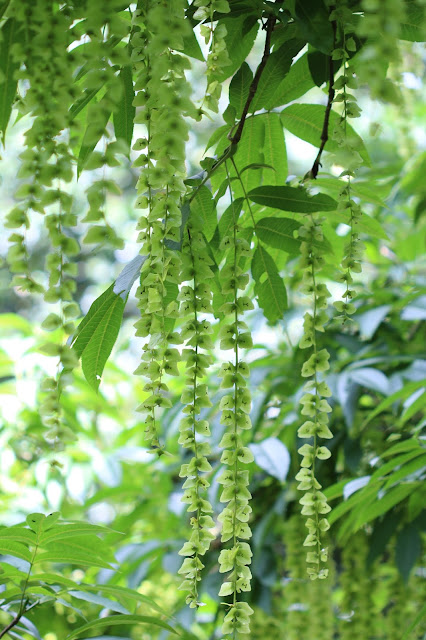 As a Christmas/birthday/never-have-to-buy-me-another-gift-ever present, the world’s greatest Poppa got us tickets to see Coldplay in London at Wembley Stadium. The concert was Sunday night and it freaking rocked! James has been to a couple smaller concerts in the past when he was little, but this is the first real big concert that he is old enough to remember and enjoy. He LOVED it!
Monday was rainy so we took the tube to St. Paul’s Cathedral. It’s absolutely stunning inside. They don’t allow pictures in a lot of these places so I actually found myself totally in the moment and just experiencing it as opposed to worrying about capturing it with my camera. It was kind of a nice break. 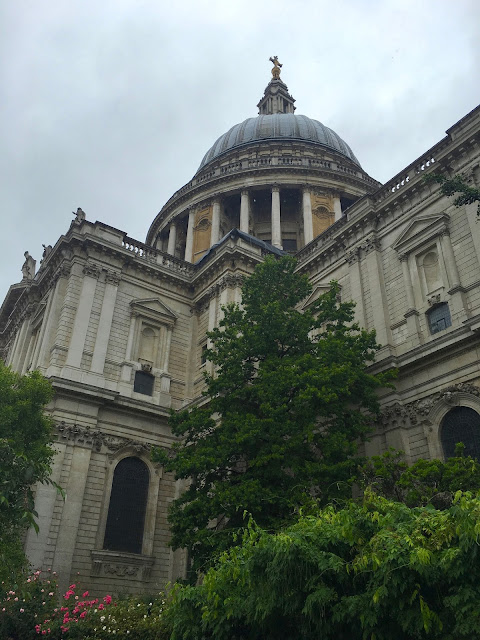 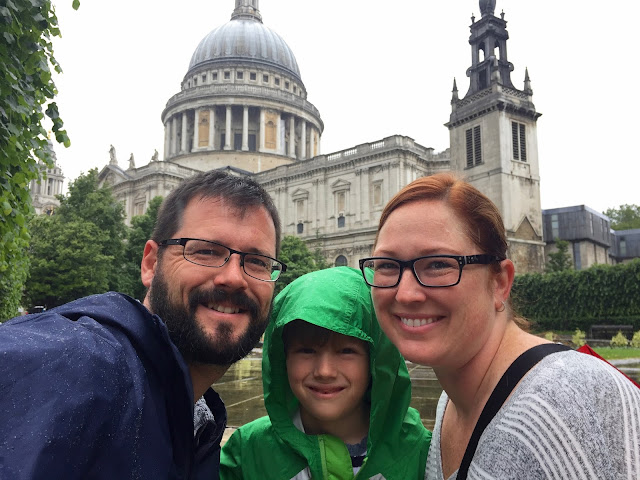 After finding a little sandwich shop for lunch, we walked past the Bank of England, also known as The Old Lady of Threadneedle Street, because James had read about her in a book and insisted on seeing her in person. Then, despite the rain, we decided to walk over to the Tower of London. It was starting to clear up and we figured, it’s England. It’s just going to rain. Why not?! 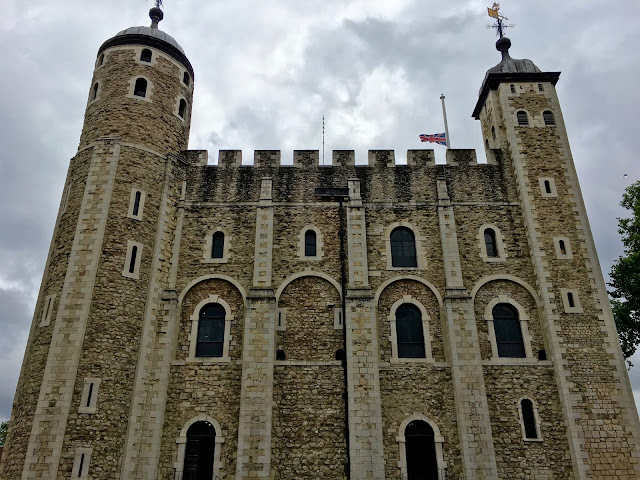 After we finished up at the Tower of London, we walked across Tower Bridge to catch a commuter train out to the suburbs of London. We had been invited to dinner at the home of Chris’s former boss, Laura, and her hilarious husband, Steve. Laura is a fantastic cook and we had some of the most delicious Indian food of our lives. It was such a nice treat to visit with them and we enjoyed some really great political conversation centering around the upcoming Brexit vote and our Presidential farce election. Who says you shouldn’t talk politics at dinner?! 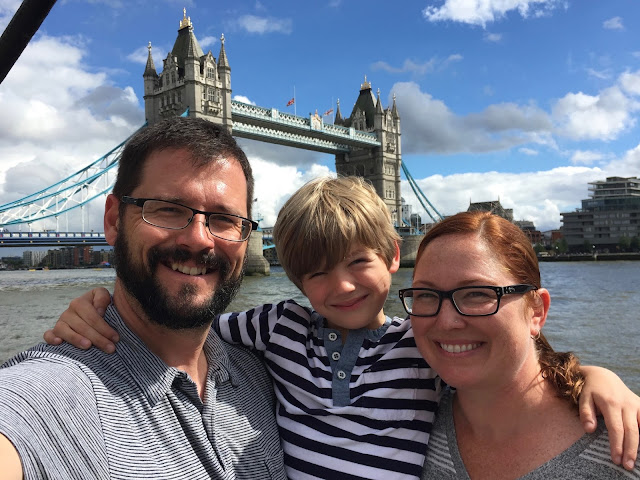 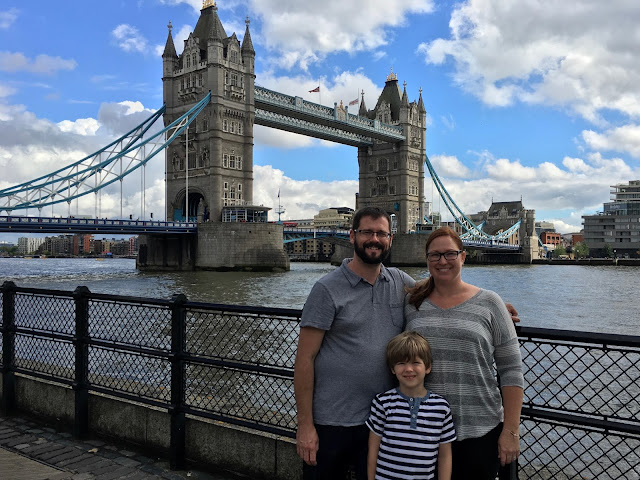 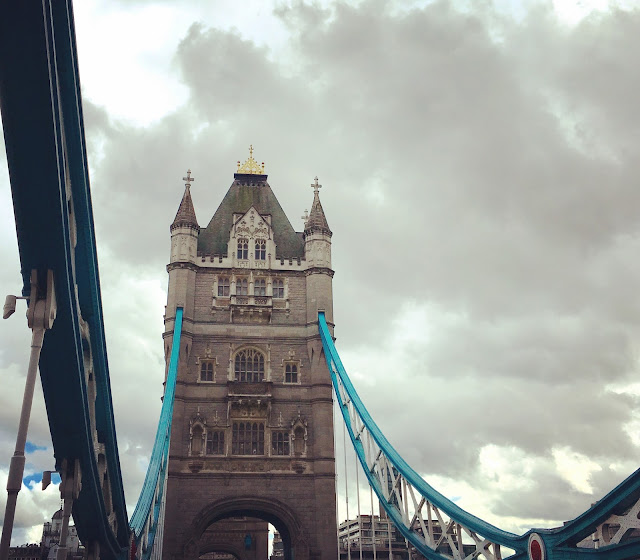 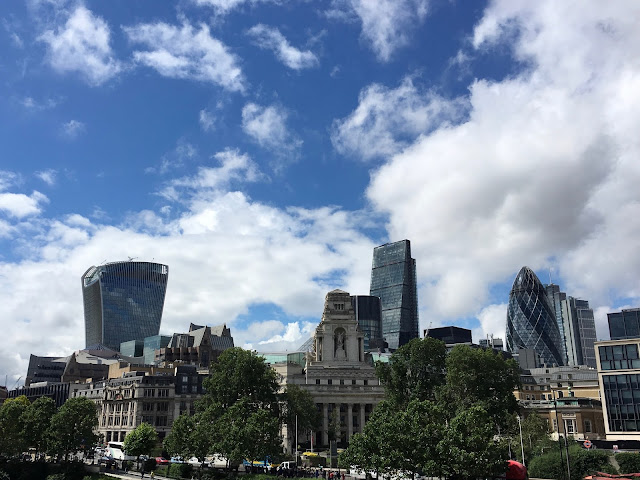 Tuesday started out bright and sunny so we opted for a lovely walk along the River Thames towards our destination of the Houses of Parliament, Big Ben, and Westminster Abbey. At the time, the Brexit vote was only two days away so the area around the Houses of Parliament was utter madness. There were news trucks and media outlets everywhere in addition to the large number of tourists who regularly amass there. It was not ideal at all, way too many people for us, but the sites themselves were worth it. The history and sheer beauty of the architecture of these places will overcome a lot! 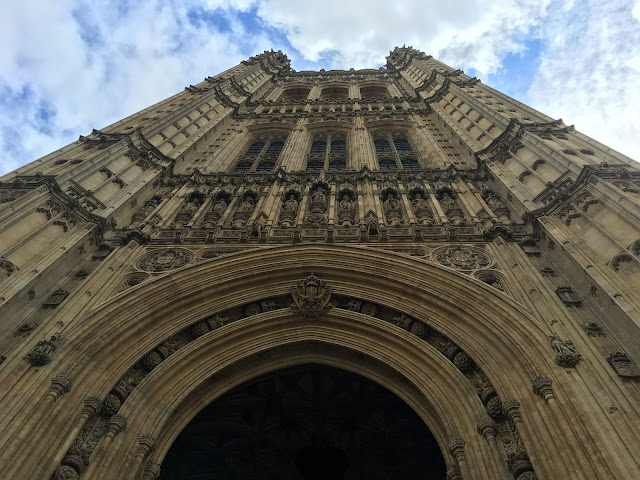 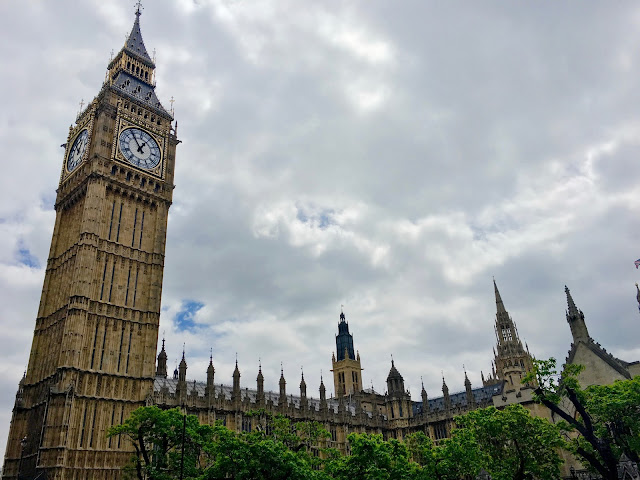 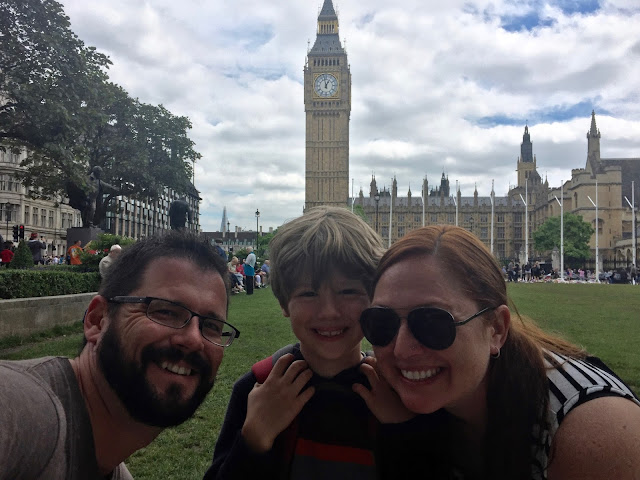 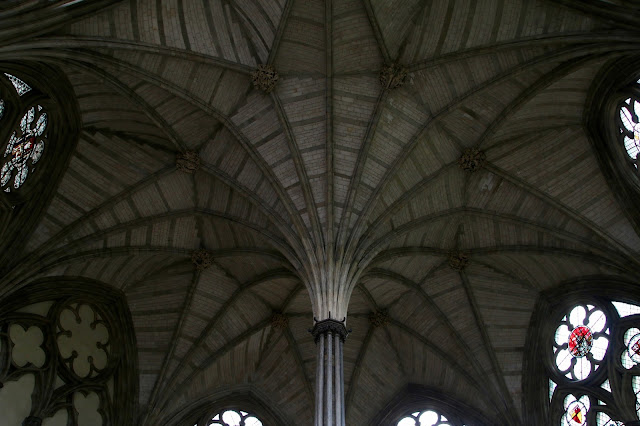 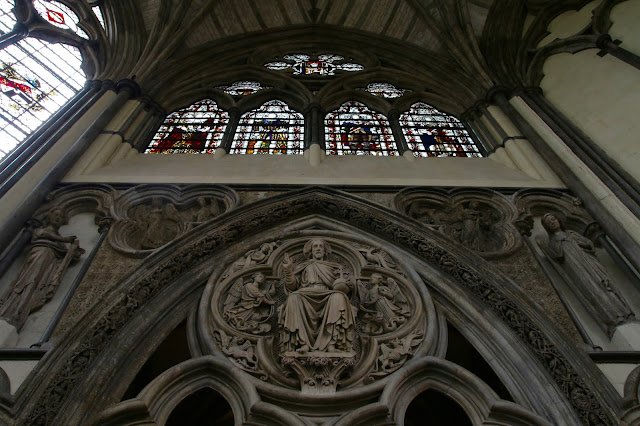 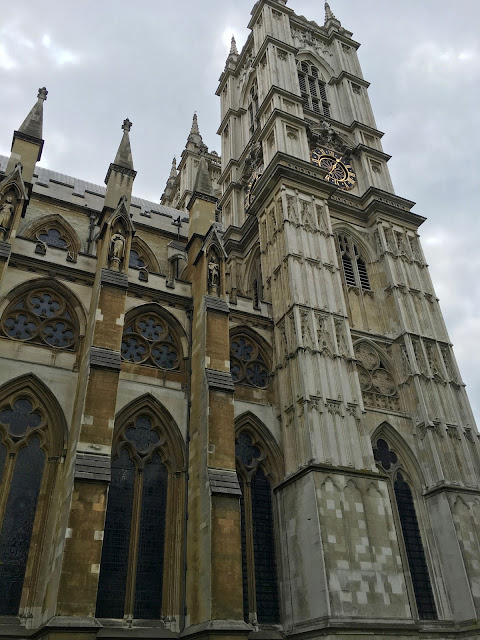 After finishing up at Westminster Abbey, we took a walk down Whitehall past 10 Downing Street and Trafalgar Square to Piccadilly Circus and the Regent Street shopping area. I was anxious to check out Liberty of London and maybe pick up some of their famous fabric for myself. I did. It’s so soft and lovely I don’t even want to use it to make anything. Yet… 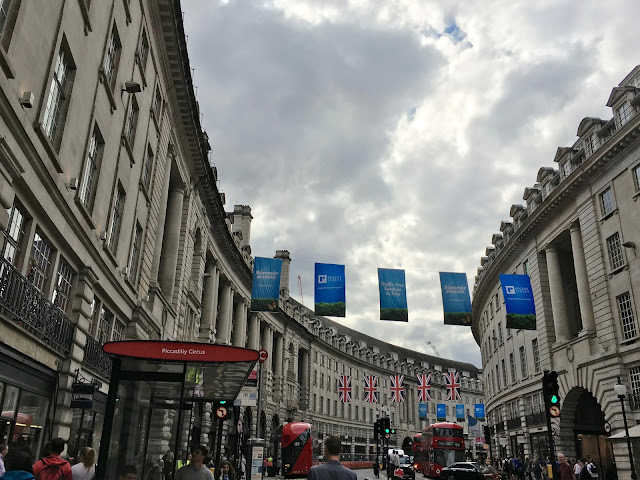 Wednesday was our last full day in London and we decided to spend it at the British Museum. Ever since we studied ancient Egypt in history, James has been dying to see a “real mummy”. Since traveling to Egypt is not in the cards right now, this was the next best thing for him. The British Museum is enormous and it would have taken multiple days to properly take in all the artifacts there are to see there. So, we pick and chose the ones that mattered the most to us. Namely, mummies, Greek marbles, and for Chris a fascinating exhibit on the history and evolution of the timepiece.
James asked me if we could recreate one of the pictures that was taken on my trip back in 2000, so we did. How cute is that?! Although, I think we have the same haircut… 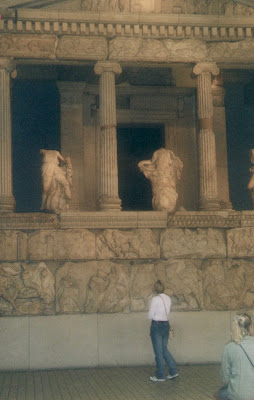 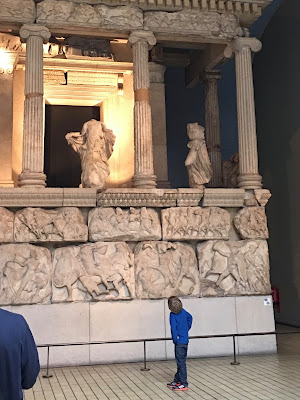 Thursday morning, we took the train back to the airport to pick up another rental car so we could finish out this vacation with the number one item on the Chris Shenk Bucket List– the Goodwood Festival of Speed held in Chichester. On the way down, we detoured over to Stonehenge and then on to the Winchester Cathedral so I could pay my respects to one of my favorite authors, Jane Austen (the cathedral ain’t too shabby either). 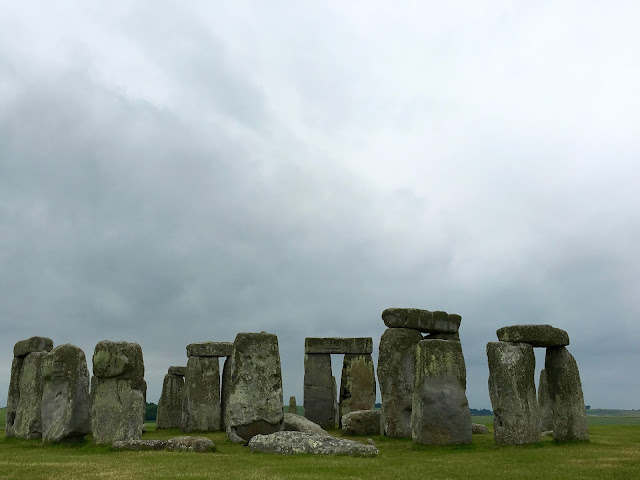 Our “hotel” over the next couple of nights was a great little pub inn called The Old Drum in Petersfield. I can’t speak highly enough of this place. We had a beautifully renovated room at the top of the stairs that included a kitchenette. The staff was friendly and wonderful, the food was delicious and the atmosphere was so quintessentially British. At the end of the day, we put James to bed in the room, locked him in, and went downstairs to the pub for a pint. Perfect! I have no idea how I didn’t end up with any pictures of this place, but if you are ever in the area, check it out.
Friday and Saturday we spent all day at Goodwood. Chris and James were in car heaven. There were races up the hill by all manner of old and new cars, manufacturers showing off their newest models, some of the most antique of cars, rally car races, and celebrity sightings to boot. 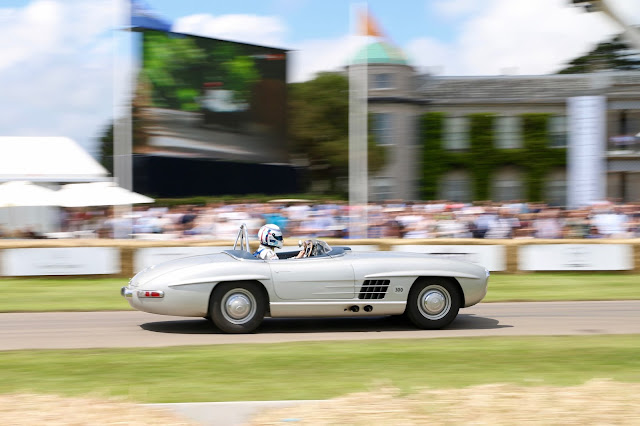 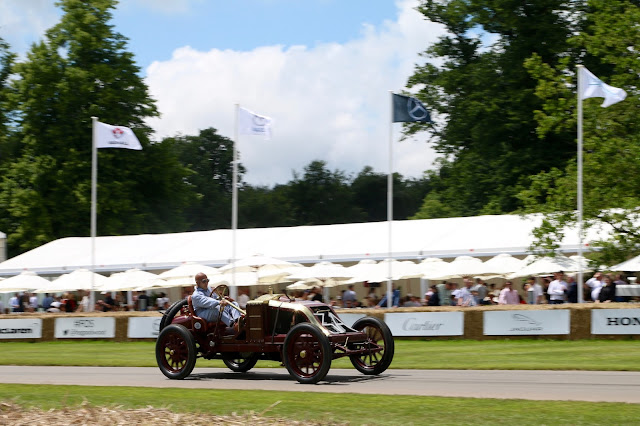 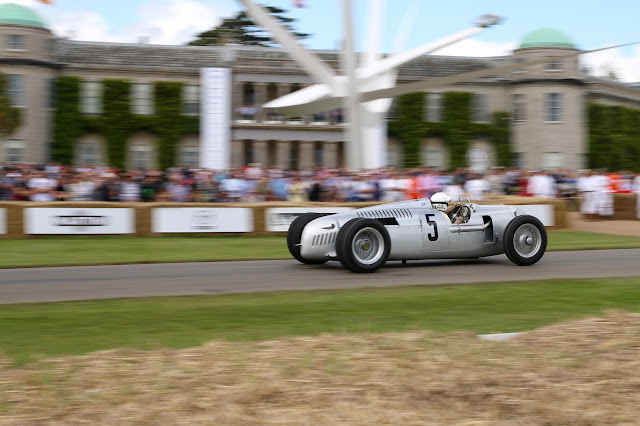 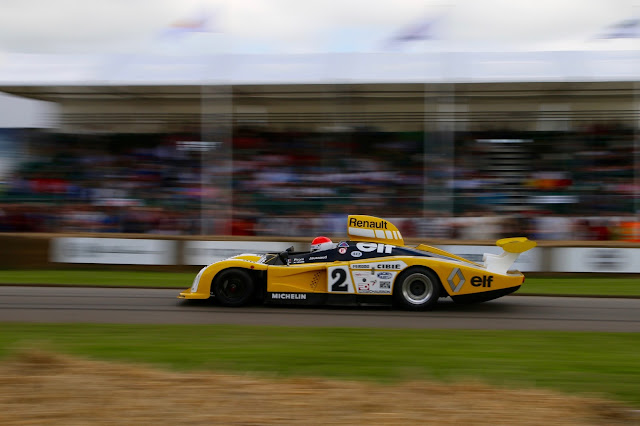 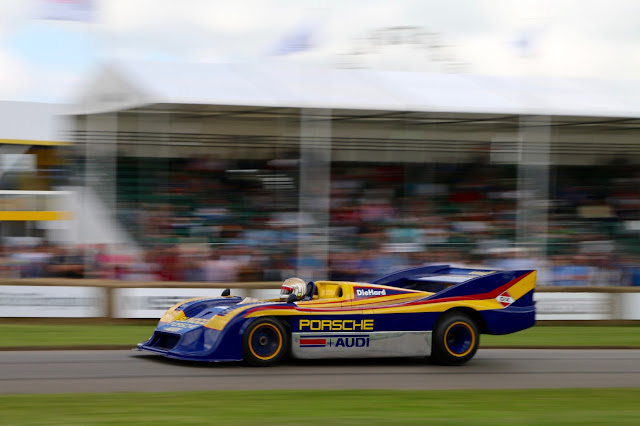 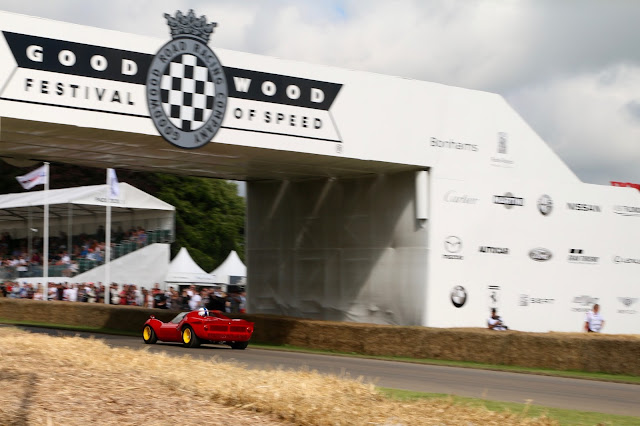 Sunday morning, we drove to the airport, returned the car and boarded the plane back to Orlando.
Overall, it was a fantastic trip with something special for each of us, and I am so grateful to travel so often and to have such great company on my adventures. Our family time is just the best!