Apparently, Chris’s obsession with cars (and yes, it IS an obsession) started at a fairly young age. There are stories of the obvious matchbox car love, something about sleeping with a tire, and the first car he could drive- the Cozy Coupe. That little plastic car was born in 1979 (the same year as Chris, must be kismet) and celebrated its 30th anniversary in 2009 with a special edition version (the same year James was born). Can you see where this is headed? I’m pretty sure James was destined for the Cozy Coupe from the time we learned we were having a boy, and it doesn’t help that he appears to be as obsessed with cars as his father. Who am I to fight such a destiny? So, on Father’s Day 2010, the Shenk Family got it’s newest member. We are now the proud owners of a Special Edition 30th Anniversary Edition Little Tikes Cozy Coupe and James has promptly forgotten he ever loved anything else. 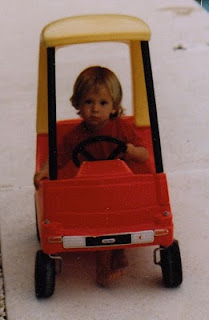 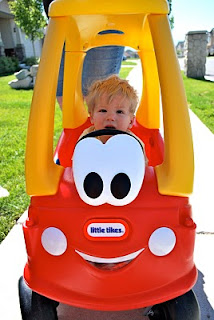